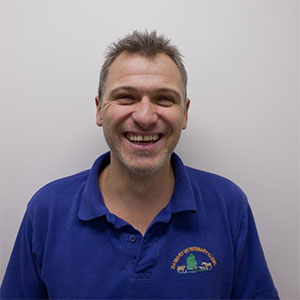 Cesar graduated from Madrid University in 1995 and worked in Spain for one year. In June 1996 he started working in the Manchester area, then moved to the Wirral and worked in a busy practice for 3 years where he met his wife, Jo.  After a sabbatical in South America he worked in Poole before joining Damory Veterinary Clinic in 2002, becoming a Small Animal partner in 2008.

Cesar’s strength is surgery, mainly orthopaedics, and he holds a European certificate in small animal general surgery. Cesar receives referrals from other practices. He is also keen on dermatology and he currently performs skin intra-dermal tests for several practices.

Although Cesar comes from a big city, he enjoys rural Dorset and its coast; he is passionate about the outdoors. He and Jo have two children, as well as a happy cat, Federico.

Book an appointment to see Cesar